What lies beneath? PhD study digs down to reveal legacy of landfill under our feet 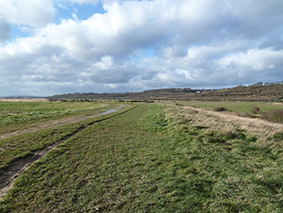 Visitors to Hadleigh Marsh seawall are unlikely to realise they are standing on a big pile of rubbish.

It may be out of sight, but the waste buried along parts of the UK’s coastal and river landscapes is not out of mind for one PhD researcher in Queen Mary’s School of Geography. Researcher James Brand is studying the pollution risk posed to marine and estuarine environments by unmanaged historic landfills around the coast of England and Wales as part of an Environment Agency funded project.

There are approximately 1,200 historic landfills around the coast of England that, due to rising sea-levels resulting from climate change, are at increasing risk of flooding or eroding into the sea. Many of these sites are hidden, having been covered and developed into recreational areas or nature reserves. Two such sites in Essex – Hadleigh Marsh seawall and Leigh Marsh – have been chosen for the project as they represent two different ages of landfill, which means they are likely to contain different contaminants. The types of materials thrown away change with each generation.

To understand what contaminants are contained within the sites, and how they may affect the environment, James needed to obtain samples of waste, which as he found out can prove challenging. 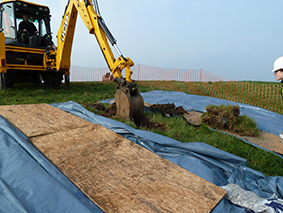 Ecologist, Laura Hammerton, supervised the works to ensure no reptiles were harmed by the digging.

“As well as requiring consents from three different landowners, the study sites are legally protected due to their importance as habitats for various species. Therefore, consents had to be obtained from Natural England before any sampling work could be undertaken,” James explained. The sites are also flood defences and within flood zones, so works within these areas require a Flood Defence Consent from the Environment Agency. Permission from Essex County Council’s landfill management team was also required. “The possibility of reptiles being present meant no works could be carried out during their winter hibernation season and an ecologist had to be employed to supervise the works.” 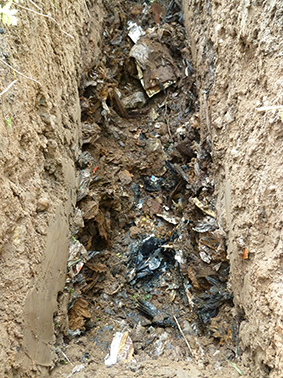 A trial pit on Hadleigh seawall reveals a variety of pungent waste.

“I wasn’t able to manually extract samples using an auger, and even a percussion corer – a pneumatic hammer that drives sample tubes into the ground – was unable to penetrate into the dense waste,” he said. It quickly became clear that James would need to use an excavator to dig trial pits. “In March I hired a specialist ground investigation consultancy to dig four pits with an excavator and collected about a tonne of samples. The waste extracted from Leigh Marsh is believed to date from the 1960s and looks and smells like compost mixed with pieces of glass, whereas the waste from Hadleigh Marsh seawall dates from the 1980s and has the look and smell of the contents of a modern bin lorry.”

James will spend the next few months processing the samples. “What I’m looking for in my analyses are the total quantities and types of contaminants, for example heavy metals and Persistent Organic Pollutants, contained within each waste sample,” he said. “Critical to my study is finding out what proportion of these contaminants is then released when the waste is put into water. Comparing the findings to Environmental Quality Standards will then enable me to determine whether flooding or erosion of these landfills carries a risk of pollution.”

Find out more about James Brand and his study or read more about undertaking a PhD at Queen Mary School of Geography.