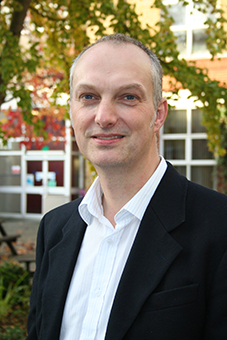 Dr Simon Lewis from Queen Mary’s School of Geography has been working with a team of researchers led by the British Museum to piece together the geological puzzle surrounding what is thought to be the setting for the ‘oldest footprints outside of Africa’. The findings, which were published in the international journal Plos One, are part of a continuing research project on the ancient human occupation of Britain.

The prints were discovered during geophysical survey work at Happisburgh on the north-east coast of Norfolk, England. Preserved in the muddy sediments of what was a river bank some 8-900,000 years ago, the familiar shapes of human feet caught the eye of one of the scientists.

Dr Lewis’s research into the geology of the site has provided information on the sediments in which the footprints had been discovered. “My role is to work out the sequence of deposits at the site and how they were laid down. This means I can provide a geological context for the archaeological evidence of human occupation at the site.” 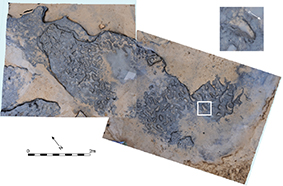 A lecturer in physical geography at Queen Mary, Dr Lewis added that the chance of encountering footprints such as this was extremely rare because not only had they survived environmental change and the passage of hundreds of thousands of years, but their location was revealed just at a time when researchers were there to see it.

“Timing was everything. Just two weeks later and the researchers would not have seen them because the tide would have eroded the footprints away.”

During the past ten years the sediments at Happisburgh have revealed a series of sites with stone tools and fossil bones; this discovery is from the same deposits. While it’s not possible to tell what the makers of these footprints were doing at the time, analysis has suggested that the prints were made from a mix of adults and children. Their discovery offers researchers an insight into the migration of pre-historic people into Britain hundreds of thousands of years ago.