Queen Mary geography graduates Ben Chandler and Emily Nash have both won awards in recognition of the outstanding quality of their undergraduate research. 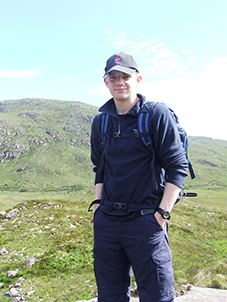 Ben, who studied BSc Geography, claimed the 2014 Marjorie Sweeting Dissertation Prize from the British Society for Geomorphology with a piece of research the evaluators judged to be ‘akin to masters-level work’. Examining a mountain in north-west Scotland called Ben More Coigach, Ben’s work identified the climate conditions that would have been necessary to maintain the glaciers present across that part of Scotland some 12,000 years ago.

Senior lecturer in physical geography Dr Sven Lukas, who supervised Ben’s project, said the amount of detail in his dissertation was unlike any he had seen before at undergraduate level. “His balanced discussion of the data he had gathered showed a critical insight beyond his years,” Dr Lukas said. “He’s been an incredibly dedicated student and has won awards for his work in each of the three years he was at Queen Mary. To be recognised by the British Society for Geomorphology, though, is truly the honour this level of work deserves.”

Ben used Adobe Illustrator to plot the mapping results of his fieldwork. Understanding how glaciers worked in the past helps inform future projections of climate change. “By mapping the glacial landforms that can be found in his study area today – for example moraines formed of glacial debris – he was able to calculate the amount of ice that would have been necessary at that altitude to sustain the glacier during the Younger Dryas cold period approximately 12,000 years ago,” Dr Lukas explained. “It’s a fascinating period to study because the climate changed so rapidly, by several degrees every decade, at both the beginning and end of this cold period.” 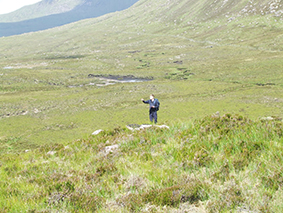 During this time, Scotland would have looked more like Svalbard in the Arctic, Dr Lukas added. “There weren’t any trees and gently-meandering rivers around like those that we have in Britain today. It was a cold desert, with permanently-frozen ground for several hundreds of years, and the landscape was being carved out by glaciers.”

Now studying at the University of Durham alongside Professor Dave Evans and Dr Dave Roberts, 22 year old Ben from Norfolk has plans to publish his dissertation in a scientific journal and undertake a PhD in glacial geomorphology. “It is an honour to have won this prestigious award and it means so much to be recognised for something on which I worked really hard and also really enjoyed,” Ben said. “The support, teaching, facilities and resources I had at Queen Mary really set me on my way for what I hope will be a future career in academia.”

Meanwhile, the Royal Geographical Society (with IBG)’s History and Philosophy of Geography Research Group unanimously awarded BA Geography graduate Emily from Wiltshire their top dissertation prize and commended her for the great originality of her dissertation. For her final year work she explored the strategies of an educational group called The Geography Collective – an eclectic group of activists, teachers, artists, academics and therapists who have teamed up to encourage young people to see and think about the world in new ways. 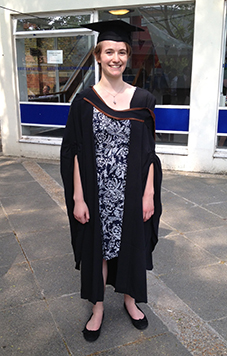 “Organisations such as the Geography Collective show that inquiries in geography are something that can happen in everyday life, as well as in the classroom and field trips. Children can explore life on their own doorstep and that’s just as important to how they develop their world view,” Emily, who is now working in communications, said. “Simple questions such as ‘how do I get to work?’ or ‘where do I buy my eggs?’ prompt young people to think geographically and this can inspire people to study the subject later in life. The everyday connections that characterise the activities of the Collective showed me the importance of a public perspective in education.”

Entitled ‘On the Wild Side’ The Geography Collective, public geographies and exploration’, the 21 year old observed the Collective in action at festivals including Hay and Latitude. Supervisor Professor Catherine Nash said she was delighted to see the project get this prestigious national prize and recognition: “This is an exceptionally well formulated, structured and executed piece of work that is full of rich insight into what geography can be in the widest sense: imaginative, inclusive, engaged, adventurous and fun,” she said. “Emily has produced a wonderfully fluent and thoughtful study that made connections with concerns and debates about geography in universities, schools and beyond in sophisticated ways. This is an inspiring piece of work for geographers of all kinds.”