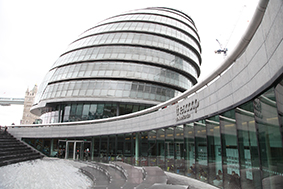 Could Greater London become the world’s first national park city? First years in the School of Geography at QMUL set out to explore this very question and their work is now on display at City Hall until October 31st.

The Reimagine London project saw the students heading off to all 33 London boroughs in their first week of university to explore and discover the green spaces of the capital. From rooftop gardens to concrete-surrounded lakes, sunken gardens to modern art installations, the students took photographs and gathered data in a bid to build a bigger picture of London’s wild side.

Working with guerilla geographer and National Geographic Emerging Explorer Daniel Raven-Ellison, the students were encouraged to think about London from a new perspective and ask questions about what sort of city it is, what makes it the way it is, how people and other living things live together, and what the future might be for the city and its inhabitants. 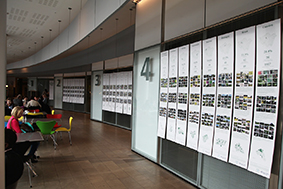 The exhibition, which is in the café exhibition space of City Hall, showcases 33 posters; one for each borough.

Professor Catherine Nash, who led the project at QMUL Geography, said the students had given her some really encouraging feedback about the event. “One student said that taking part in fieldwork in the first week of university instead of going straight into lectures had made the whole process of moving on from A Levels less intimidating,” she said. “Others added that the group work really helped them ‘break the ice’ with their peers as well as appreciate the green spaces of London. Overall, it was great to see the whole year group in action, working together and producing such a huge body of work.” 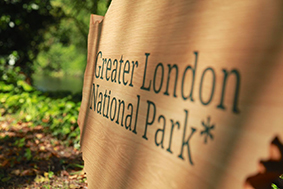 The project will continue to develop in the School of Geography as a small group of volunteers will be working with Professor Nash and Daniel Raven-Ellison during the next few months to produce a Greater London National Park workshop in the new year too.