Exhibition 'Uncovering the Invisible: A Portrait of Latin Americans in the UK'

Research on Latin communities living in London by geographer Professor Cathy McIlwaine has been the inspiration for an exhibition due to open this month at the Instituto Cervantes of Manchester.

‘Uncovering the Invisible: A Portrait of Latin Americans in the UK’ is a series of 22 photographs born through the collaboration between photographers Roxana and Pablo Allison, which will be displayed in the main hall of the Instituto Cervantes from the 20th of March. 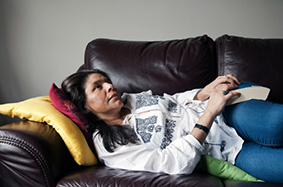 Carmen, from Nicaragua works in the voluntary sector and is part of the ‘Uncovering the Invisible: Latin Americans in the UK’ portrait exhibition.

This exhibition brings together the portraits of several Latin Americans living in the United Kingdom in order to bring these people’s reality to light and to get to know how they have adapted to their new surroundings. It also focuses on displaying the diversity of races and experiences of these people, who contribute both economically and culturally to the shaping of British Society. To date there are an estimated 180,000 Latin Americans living in this country.

“Many Latin American migrants end up in London as a result of what we describe as uneven processes of international development as well as widespread political insecurity,” Professor McIlwaine explained. “This experience leaves them struggling to secure their livelihoods and so many make the difficult decision to migrate in order to try and build a better lives for themselves and a better future for their children.” 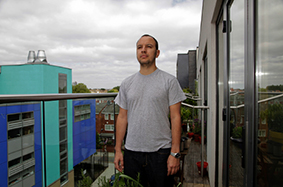 Alex from Mexico works as a Computer Systems Marketing Programmer. His portrait appears in the ‘Uncovering the Invisible: Latin Americans in the UK’ exhibition.

Professor McIlwaine’s research is addressed in several ways through her teaching on the module Globalisation, Development and Inequality (GEG4104) as well as Gender and Development (GEG6101).

To book for the Opening Day you can write to prenman@cervantes.es.