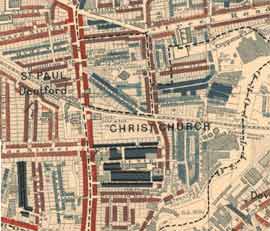 An entrepreneurial geography graduate from Queen Mary, University of London has orchestrated a new walking tour around Deptford, following in the footsteps of Victorian reformist, Charles Booth.

For his MA in London Studies, Sean Patterson, 47, examined Booth's famous study of nineteenth-century working-class life in the capital, which resulted in the publication of his pioneering 'poverty maps' in 1902.

"Booth's poverty maps charted the affluence of the city," explains Sean, "with streets colour coded according to the social status of inhabitants, ranging from yellow for 'wealthy' to black for 'semi-criminal'. His work highlighted that 35 per cent of Londoners lived in abject poverty, much higher than previously thought.”

Sean's tours follow the actual route Booth walked in 1899 as he collated his research on Deptford, the London suburb he designated 'District 45'. "I use Booth's detailed notes on Deptford as a start point, but the tour also combines fascinating landmarks, literature and key events in the town's 400-year history to add colour to the story," says Sean.

Along the route, walkers are invited to recite passages by famous historical figures with Deptford connections. Charles Dickens opens his classic novel Great Expectations in Deptford and Pepys contemporary John Evelyn was a Deptford local; Queen Elizabeth I knighted Sir Francis Drake at the Deptford Docks; and Captain Bligh, sailed the Bounty from Deptford on its ill-fated journey to Tahiti in 1789.

During the three-hour walk, there is also the chance to hear eyewitness accounts of the devastating effects of German rocket attacks on Deptford during World War II and documentary evidence from the original coroner's report on Christopher Marlowe's death. The famous poet and playwright was murdered and buried in Deptford in 1593.

Sean Patterson studied for his MA in London Studies at Queen Mary, part-time over two years. He completed his studies, with a distinction, in September 2010.

The 'District 45' walks, which include a short stop at a local public house, meet at 10.30am outside Deptford Deli Café at 4 Tanners Hill, SE8.

Walks cost £10 for adults and £8 concessions.

For dates and reservations, visit: www.charlesboothswalks.com