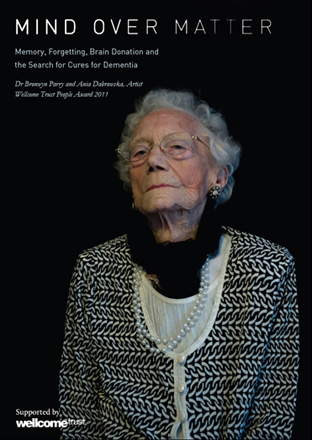 Mind Over Matter is a science-art collaboration about dementia and the contribution that a unique cadre of twelve brain donors, aged between 84 and over a 100, will make to finding a cure for this devastating disease in the 21st century.

Dementia, which literally means ‘without mind’, affects cognition and can cause dysfunction of memory, attention, language or problem solving, in many cases leading to a total disorientation in time (not knowing what day of the week, month, or even what year it is), in place (not knowing where they are), and in person (not knowing who they or others around them are). Understanding the scientific basis of this disease entails undertaking research on human brain tissue drawn from people who were affected by dementia and people who were not, at a time when the practice of retaining bodily parts for medical research has been rendered abject through past cases of unethical practice and adverse media attention. Mind Over Matter demystifies what happens behind the doors of brain bank laboratories, and in so doing actively seeks to rehabilitate, even celebrate, the practice of bodily donation in the public imagination.

Working through issues relating to autonomy, the legacy of gifting, and the brave new world of biological re-modelling, the Mind Over Matter exhibition and publication draw back the veil of secrecy that has historically surrounded the practice of bodily donation, to reveal the selfless generosity and courage of individuals who have elected to donate their brains after death for neuroscientific research. The authors of the project were privileged to meet some of Britain’s oldest prospective brain donors who agreed to be photographed and interviewed about their lives and involvement in brain research. For these donors death proves not to be the end of life for their brains, but rather a mere stopping off point in a journey that sees them travel out and beyond their bodily lives to the global research laboratories of the future.

Drawing on themes of memory, death, the transience of the body and ageing, the artist uses the labyrinth-like exhibition site to evoke a phenomenological experience of what it might feel like to lose one’s memory. Ania Dabrowska interweaves photographic portraits, appropriated archival and medical photographs, projections, sound narratives and scientific artifacts to present a layered contemplation about the nature of memory loss, and to trace the new lives that the brains take on after the donors’ death.

Visual representation of organ donors is unprecedented in the UK and the project is ground-breaking in de-anonymising these donors. In reflecting on why bodily donation has always been a strictly anonymous activity, the authors explore what the ethical, psychological, religious and social implications are for donors, their families and researchers in re-negotiating the historical relationship between anonymity, objectivity and the impartiality of science. As some of the donors who participated in Mind Over Matter have now passed away, the project provides a unique record of their philosophies on life, the relationship between memory and identity, death, donation and the ephemerality of the body.