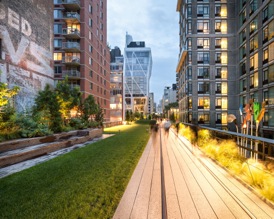 The purpose of moving between the street- scapes of modern and global New York is to understand more fully how urban memory and nostalgia, as well as industrial heritage and transport technology, are used in the High Line and its various spin-off projects (like the Queensway and the Lowline) to enable a practice that will be called ‘retro-walking’. To make this argument, Christoph Lindner traces connections between New York and urban renewal initiatives in Paris and Detroit, while also rethinking theories of the flâneur in relation to the aesthetics of mobility and discourses of the smart and sustainable city.

Professor Lindner is a Distinguished Visiting Fellow at the School of Languages, Linguistics and Film. This lecture is held jointly with The City Centre at Queen Mary University of London.