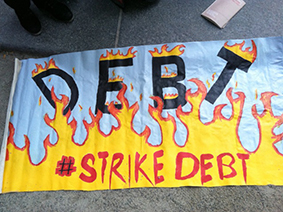 In this open lecture and discussion based on his new book, Andrew Ross argues that we are in the cruel grip of a creditocracy – where the finance industry commandeers our elected governments and where the citizenry have to take out loans to meet their basic needs. The implications of mass indebtedness for any democracy are profound, and history shows that whenever a creditor class becomes as powerful as Wall Street, the result has been debt bondage for the bulk of the population. 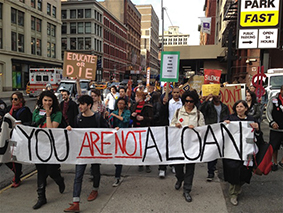 Following in the ancient tradition of the jubilee, activists have had some success in repudiating the debts of developing countries. The time is ripe, Ross asserts, for a debtors’ movement to use the same kinds of moral and legal arguments to bring relief to household debtors in the North. After examining the varieties of lending that have contributed to the crisis, Ross suggests ways of lifting the burden of illegitimate debts from our backs, and outlines the kind of alternative economy we need to replace a predatory debt-money system that only benefits the 1%. 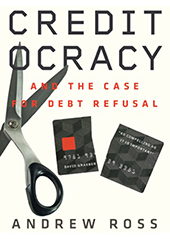 Andrew Ross is Professor of Social and Cultural Analysis at New York University, and an activist with Strike Debt and the Rolling Jubilee. He has written for the Nation, New York Times, Guardian, and Village Voice, and he is the author of many books, including, most recently, Creditocracy and the Case For Debt Refusal, Bird on Fire: Lessons from the World’s Least Sustainable City, and Nice Work If You Can Get It: Life and Labor in Precarious Times.

All are welcome to attend - there is no need to register.