Beyond the east: South Bank of the Thames 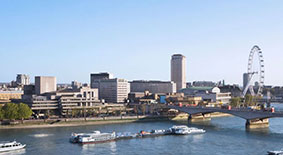 The South Bank of the River Thames.

The Southbank Centre near Waterloo is London’s pre-eminent centre of culture. Originally built as part of the Festival of Britain in 1951, it is home to ever-changing exhibitions of contemporary art. In the Hayward Gallery; classic and avant-garde film-making at the National Film Theatre; and a range of music and spoken word at the Royal Festival Hall. The area is also home to street performers, cafés, restaurants, and bookstalls. Walking along the South Bank of the Thames from here, you will also find the Tate Modern, the national gallery of modern art, and Shakespeare’s Globe Theatre.