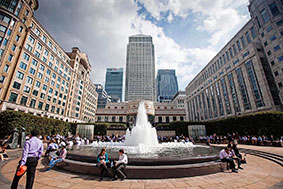 We are close to the financial hubs of Canary Wharf and the Docklands.

As well as being a centre of global finance, the Docklands is also a living case study of London’s socio-economic and cultural history. The Museum of  London Docklands tells the story of the changing face of the area: from Roman settlement, through eighteenth- and nineteeth-century industrialization, to substantial and politically contentious redevelopment and repurposing in the 1980s, and up to the ambitious building schemes of the twenty-first century. On the other side of the river at Greenwich is the National Maritime Museum, with which we also have research collaborations.