Beyond the east: central London 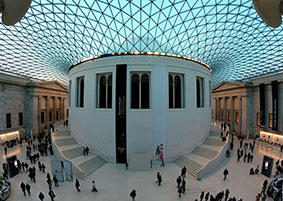 The British Museum in Holborn.

London is teeming with resources for geographical researchers. These include invaluable general resources, such as the British Library, the British Museum, the Royal Geographical Society (with IBG), and Senate House Library. It also includes a range of specialist resources: whether you’re working on experiences of migration, geographies of home, imperial cities, contemporary art practice, or histories of science and medicine, there’s a specialist library or archive in London for you. Geographers and environmental scientists can also attend an exciting range of research lectures organised by the British Hydrological Society and the London Freshwater Group. Our students have previously taken part in debates too, such as the Annual City Water Debate and one on flood management at the House of Commons.