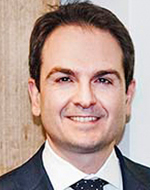 Brekoulakis is regularly listed in the Who’s Who Legal: Arbitration, described as “standing out as a first-rate arbitrator and academic; an expert in construction and commercial disputes and is regularly engaged in matters arising out of major infrastructure projects around the world”. He was also listed in the Who’s Who Future Leaders: Arbitration 2017 as one of the ten most highly regarded future leaders, described as “very thorough and professional” and “held in the highest regard”, named as a GAR Thought Leader—Arbitration 2018 and 2019, and nominated for GAR “Best Prepared and Most Responsive Arbitrator” in 2016. He has been appointed in more than 30 arbitrations, as chairman, sole arbitrator, co-arbitrator and emergency arbitrator under the rules of the ICC, LCIA, SCC, DIA, CAS and UNCITRAL Arbitration Rules.

He holds an LLB degree from the National University of Athens, an LLM degree in International Business Law from King’s College London and a PhD degree in Arbitration and Conflict of Laws from Queen Mary University of London (QMUL).

Brekoulakis has been included in the Queen Mary submission for both REF 2008 and REF 2014 on the basis of recommendations from a number of dry runs and external reviews of his work.

His current research projects revolve around the following areas:

Brekoulakis is currently leading a major interdisciplinary research project on Impartiality in Investor State Dispute Settlement (ISDS). This is a three-year research project which employs a mix-empirical methodology (questionnaires, interviews, surveys) aimed at investigating accusations of lack of impartiality in ISDS. The primary academic outputs of the project will be a jointly authored monograph and at least four journal articles submitted to high-ranking journals. Papers on the interim and final research findings will be presented at two workshops and a final conference, and be published in an edited volume, including papers from the academics presented at the workshops and conference.

Publications within the REF 2021 period