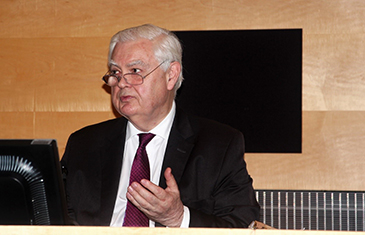 This is now one the of key dates in the Energy Law Calendar for energy law academics, practitioners and policy-makers in the UK and internationally.

In 2015, we welcomed Lord Browne of Madingley, former CEO of British Petroleum (BP), for the inaugural 2015 Annual Clifford Chance lecture. He spoke about the energy sector and its relationship with society, while touching on his role to help encourage greater transparency in developing countries and tackle climate change.

The 2017 lecture was given by Lord Lamont, who explored the implications of Iran’s re-entry into the international fold in the wake of the nuclear agreement.