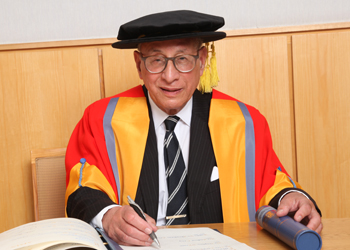 Queen Mary, University of London, has awarded Honorary Fellowships during its 2012 summer graduation ceremonies to seven distinguished figures in their fields, including former judge Lord Millett. Honorary Fellowships are awarded by Queen Mary to those who have rendered significant services to the College or the wider community.

Lord Peter Millett was presented with his Honorary Fellowship on Friday 13 July by Sir Roy Goode, founder of the Centre for Commercial Law Studies at Queen Mary. As a QC, Lord Millett appeared in many leading cases in the House of Lords. He was appointed a Judge of the Chancery Division of the High Court in 1986, a member of the Court of Appeal in 1994 and a Lord of Appeal in Ordinary in 1988.

Lord Millett retired from his full time judicial duties in the House of Lords in January 2004, but continues to sit in the Court of Final Appeal of Hong Kong. Sitting as an arbitrator, he provides expert legal advice on English law to foreign courts.

"Lord Millett was chair of the CCLS Advisory Council from 1995-2004 and supported the centre during a period of change and growth".