The Patents Court, the Court of Appeal and the Supreme Court (before that, the House of Lords) have all and for many years stressed the need for consistency with decisions of the Boards of Appeal of the EPO. They have also taken account of decisions of the national courts of other EPC member states on many occasions in pursuit of consistency, in relation to validity but also infringement. This lecture will consider: how this has been done; when it has worked well and less well; how it can and should work if the EPO (in particular) changes or develops its law differently from the UK; and how that fits with the law of precedent. It will also consider the issues that may arise with decisions under the UPC. 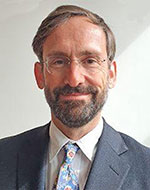 The Hon Mr Justice Meade, A judge of the High Court of England and Wales

Richard Meade was called to the Bar in 1991 and practised from 8 New Square until 2020, taking silk in 2008. He appeared as an advocate in the Patents Court, the Court of Appeal and the House of Lords/Supreme Court in numerous patent cases, as well as in the European Patent Office at all levels, including the Enlarged Board of Appeal. He was appointed a High Court Judge in September 2020 and has been Judge in Charge of Intellectual Property since 2021.

This lecture is followed by a drinks reception.

**If you have any food allergies, please do let us know when registering.