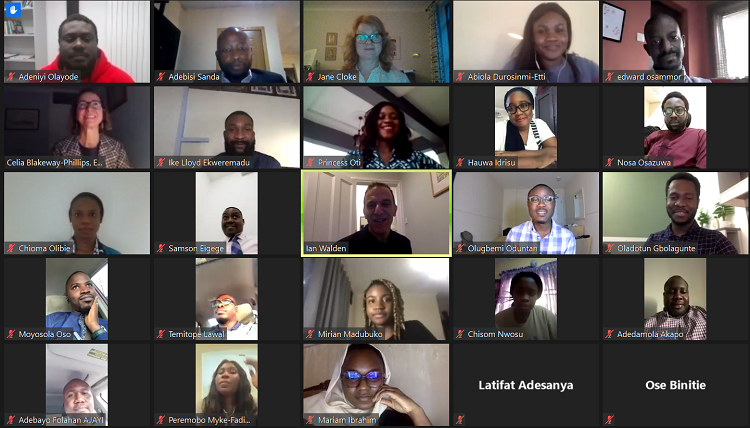 The CCLS Nigeria Chapter has officially launched with an online welcome event hosted by Professor Ian Walden, CCLS Director, and the academic who is attached to the Chapter.

Joining the attendees was the Chapter Chair Adebisi Sanda (Law and Economics LLM, 2014), along with the Chapter Committee members.

Alumni were invited to share what they are doing now and to reminisce about their experiences at CCLS.

Edward Osammor (Laws LLM, 1999) said: "I started at Queen Mary studying a BSc in Economics, then went on to do a LLB there. After, I was called to the Bar and then I returned to CCLS to do my LLM. One of my courses was on International Commercial Arbitration, lectured by Dr Julian Lew and Professor John Adams, who were renowned arbitrators, this led me to my interest and that is what I concentrate on in my work today. It put me in good stead now and has ultimately led me to become an Arbitrator and Fellow of the Chartered Institute of Arbitrators."

Samson Eigege (Energy and Natural Resources Law LLM, 2018) recollected that he had a lot of experiences that were memorable. He went on to say "I had work placement experience for two weeks at Norton Rose Fulbright LLP (London) as part of my NRF Scholarship package. In that short period of time I did a lot of work on Energy Arbitration and had the opportunity to attend an ICC Arbitration hearing. I participated in the CCLS mentorship programme. My experience with my mentor, James Cowan (Jim), was great due to my dispute resolution background, as he was at the time the Associate General Global Counsel, Litigation – Europe, Asia-Pacific and Africa at Shell Oil, and the African office was in Nigeria. He said that I was the most fortunate mentee as he was always in London during the mentorship programme and we met a lot."

Hauwa Idrisu (Energy and Natural Resources Law LLM, 2016) shared: "The best parts of my LLM were firstly being awarded the 2015 CCLS - Unilag Scholarship to study at QMUL and being part of the inaugural mentorship programme. Through this I got a work placement at Dentons (London) via my amazing mentor whom I still have a good relationship with post my time at QMUL. I also had a great time exploring new places, cuisines and coffeehouses such as Starbucks. Most importantly, my experience at QMUL broadened my knowledge base. I sincerely enjoyed my time at the university and have no regrets."

Lloyd Ekweremadu (Energy and Natural Resources Law LLM, 2018) said "I lived in North London and I enjoyed my commute to Holborn every day. It was quite different from being in Nigeria."

Abiola Durosinmi-Etti (Commercial and Corporate Law LLM, 2014) followed up with: "I was able to connect with many international people at CCLS. I still keep in touch with many which helped build my career. I was very excited when I was told about this new Chapter."

Adebisi asked the audience if they had any ideas for the future Chapter activities. There was some discussion regarding having a body where mentorships can be offered for recent graduates and students. Also, to foster collaboration among alumni in the private and public sectors and academia. There was an appetite to share learning and academic opportunities among the group.

Adebisi thanked the Committee for their support and thanked everyone for attending the event.

After the official but informal event was over, Adebisi and the alumni carried on talking, networking and discussing ideas for the future activities for the Chapter.

You can join other alumni on the CCLS Nigeria LinkedIn.

Go back to the CCLS Nigeria Chapter web pages.