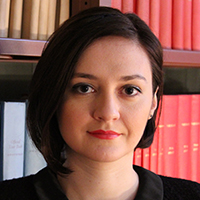 Dr Elena Doldor is a Lecturer in Organisational Behaviour at Queen Mary University of London, School of Business and Management. Before joining Queen Mary, she worked as a Senior Research Fellow at Cranfield School of Management, where is obtained her PhD. Elena has an MSc in Organizational Psychology from Pierre Mendes University, France, and was a Fulbright Visiting Fellow at Northwestern University USA.

Elena's research interests are in the field of divesity and leadership, with an emphasis on the processes shaping the career progression of women and ethnic minorities in organizations. Her research projects examined power and politics in organisations, and the role of organizational politics in the experiences of male and female managers. She also examined diversity on UK boards of directors, and the role of executive search consultants in increasing board diversity through the board appointment process. She has written book chapters and co-authored several reports on these topics, and has published in the British Journal of Management, and Equality, Diversity and Inclusion: An International Journal. More recent research projects investigate the experiences and identities of highly skilled Romanian professionals in the UK, and the career trajectories of demographically diverse employees in professional services firms.

Elena is a member of the Academy of Management and the British Academy of Management, and a Visiting Fellow at Cranfield School of Management. As an Occupational Psychologist and independent consultant, she was involved in designing and delivering diversity management initiatives, leadership development training and assessment and development centres in several countries including France, Romania, Nigeria and the UK.