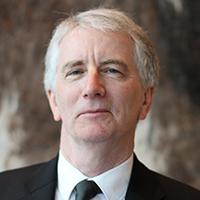 His research has been in the fields of central-local relations, devolved public services, politician-bureaucrat relationships, professionalism in the public sector, intergovernmental relations and regional government. He has authored or co-authored five books and numerous articles and book chapters on public policy in Britain, Australia and the USA. Most recently he has been working on a special issue of Local Government Studies which compares how the intergovernmental relations of ten European countries coped with the Covid-19 Pandemic. He has also been working on a long term study of the politics of social housing delivery over the last 20 years and comparative studies of social housing and land-use planning.

Martin is interested in supervising students in these areas:

Martin was a member of the UK Business and Management Research Excellence Framework 2014 Sub-Panel and of the Research Assessment Exercise 2008 Business and Management Studies Sub-Panel. He has served as the Chair of the Joint University Council Public Administration Committee (2009-11), the learned association for public administration in the UK, and as a Co-Convenor, European Group for Public Administration Standing Group on Local and Regional Government. He is also a Fellow of the Academy of Social Sciences.