The School of Business and Management supplied a number of students with tickets to an exclusive webinar and Q&A session with Bill Gates and Alok Sharma. 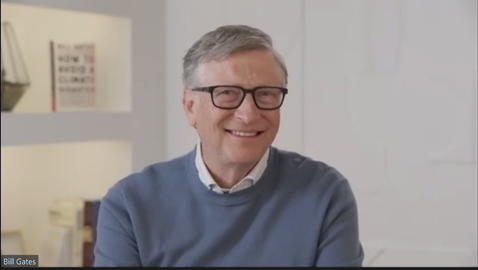 On Wednesday 17 February 2021, the How To Academy and Penguin Live hosted the webinar 'Bill Gates - How to Avoid a Climate Disaster'. In conversation with Alok Sharma, President of the COP26 Climate Conference and former Secretary of State for Business, Bill Gates set out a wide-ranging, practical—and accessible—plan for how the world can get to zero greenhouse gas emissions in time to avoid a climate catastrophe.

Bill Gates has spent a decade investigating the causes and effects of climate change. With the help of experts in the fields of physics, chemistry, biology, engineering, political science, and finance, he has focused on what must be done in order to stop the planet’s slide toward certain environmental disaster. During the webinar, he explained not only why we need to work toward net-zero emissions of greenhouse gases, but also detailed what we need to do to achieve this profoundly important goal.

“It’s easy to feel powerless in the face of a problem as big as climate change. But you’re not powerless. And you don’t have to be a politician or a philanthropist to make a difference.” – Bill Gates

The session was followed by a question and answer session, where attendees were able to pose their questions to Bill Gates. Attendees will also be sent a copy of Bill Gates' new book, How to Avoid a Climate Disaster.

Danut Ilie Orza, MSc Marketing student, said: "It was a great opportunity for me to listen to Bill Gates and discover new things. I can't wait to read the book. For me, as a marketing student, it was also an excellent opportunity to learn how to make others understand the situation we are in and what are the implications of the climate crisis."

Bill Gates is a technologist, business leader, and philanthropist. In 1975, he cofounded Microsoft with his childhood friend Paul Allen; today he and his wife, Melinda, are cochairs of the Bill & Melinda Gates Foundation. He also launched Breakthrough Energy, an effort to commercialize clean energy and other climate-related technologies. He and Melinda have three children and live in Medina, Washington.