The UK Prime Minister, Boris Johnson, has recognised the charitable work of BSc Business Management alumnus Bilal Bin Saqib with a Points of Light award. The award was given for the 'One Million Meals' campaign, which saw over 100,000 meals delivered to key workers and people in need throughout the pandemic. 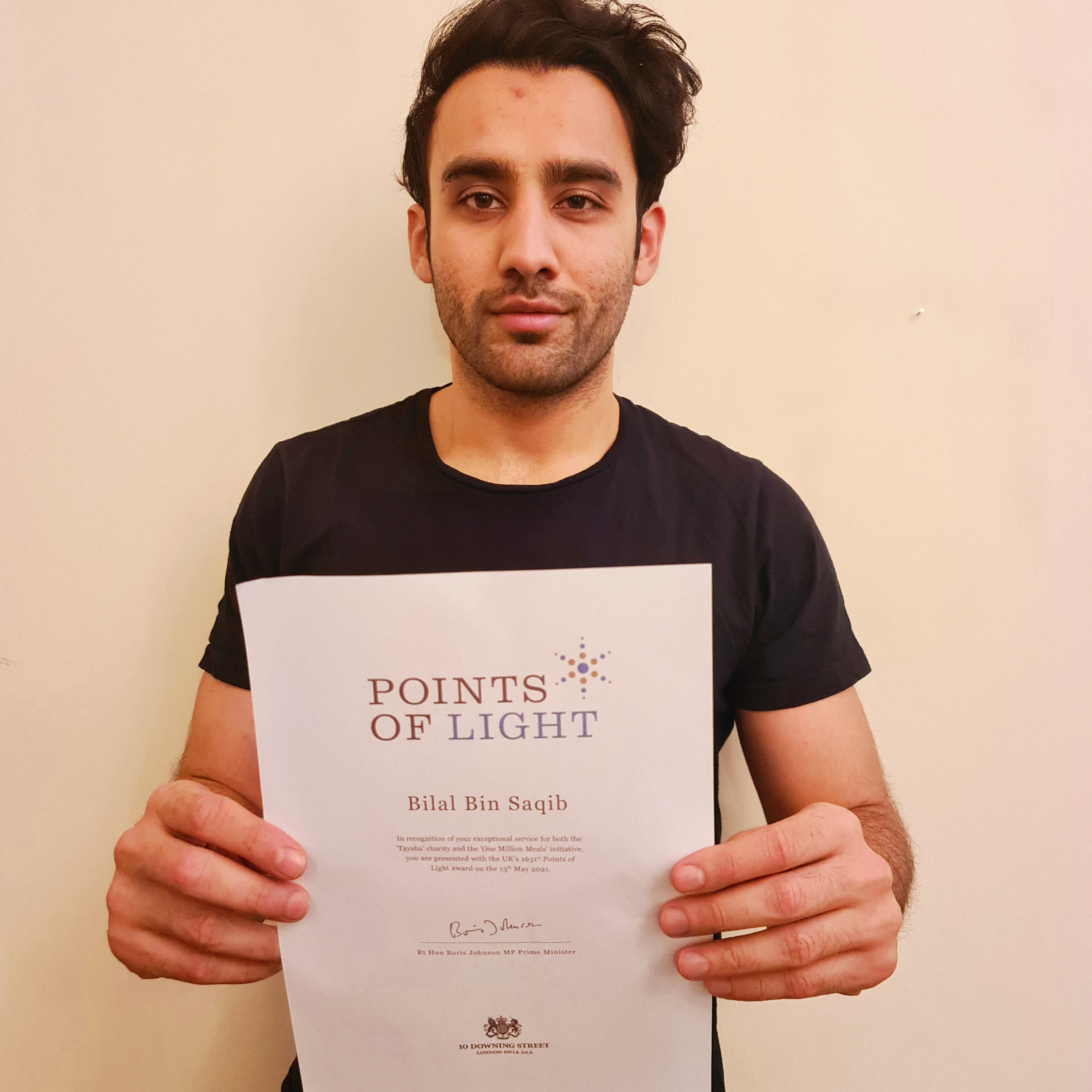 Bilal Bin Saqib with his Points of Light award

The Points of Light award recognises outstanding individual volunteers and highlights those who are making a change in their community.

The UK Prime Minister, Boris Johnson, has awarded BSc Business Management alumnus Bilal Bin Saqib with a Points of Light award for his work in co-founding the ‘One Million Meals’ campaign in March 2020, after being moved by stories of NHS staff going hungry during long shifts.  The Prime Minister also recognised the charitable work of his brother Momin Saqib, and Raja Suleman Raza and Muhammad Arif Anis who were co-founders of the initiative.

At the time, Bilal said: “One ambulance unit said that they were without food for hours, with no time to go out to grab a meal and unable to order food deliveries due to the lockdown. We almost cried after receiving these messages. People believe that the NHS has billions of pounds and the staff can afford meals as they are well paid. However, they forget that they are on the war front and it is not a question of affordability – it is a question whether we are standing by those who are putting their lives on the line.”

Since then, campaign has provided over 100,000 free and nutritious meals to NHS and key workers including police, school staff, and firefighters, the homeless, and people in need. The campaign has received support from sporting stars such as former footballer David Beckham and boxer Amir Khan, and has inspired hundreds of volunteers to help with communications and deliveries, and local companies who have donated food and healthy drinks. Operating in more than 200 locations through 47 hospitals, trusts and food banks, the initiative aims to continue providing nutritious meals whilst the nation recovers from COVID-19.

In a personal letter to the ‘One Million Meals’ co-founders, Prime Minister Boris Johnson said:

“As we mark Eid al-Fitr, let me thank you for all that you have done in the spirit of community to feed thousands of key workers and vulnerable people through your ‘One Million Meals’ campaign. Your partnership with local restaurants is an inspired way to support businesses while getting top quality hot meals to people who really need them.”

Bilal said: “I am extremely humbled to have received this recognition from the honourable Prime Minister himself. Our ongoing work for communities has been with the pure intent of improving lives as much as we possibly can. Providing ease in water accessibility to the water-deprived communities has always been a cause that’s close to my heart.”

Bilal and Momin are also co-founders of ‘Tayaba’, a charity which provides clean water solutions for vulnerable communities in Pakistan. Set up in 2016, the charity has pioneered the use of “H2O wheels”, specially-designed plastic water-carrying devices which can be easily rolled along the ground and can hygienically store more than 40 litres of water, which is eight to ten times more than can be held by a traditional water pot. Over 6,500 H2O wheels have been distributed to areas that have been struck by water-scarcity issues, giving support to more than 40,000 families.