Congratulations to the students of Queen Mary on making it through to the regional finals of the Hult Prize 2019. The global student social entrepreneurship competition.

The Hult Prize is the world's largest student competition for social good. Established in 2010 by Bertil Hult, the annual, year-long competition crowd-sources ideas from teams of MBA and university students after challenging them to solve a pressing social issue.  Championing the Hult Prize competition at Queen Mary is the Hult Prize winning mentor of last year’s event is Dr Evangelos Markopoulos, Associate Lecturer in Entrepreneurship and Innovation, School of Business and Management (SBM). This year’s challenge announced on the 15 September 2018 at the UN by President Bill Clinton is how to create 10,000 jobs in the next 10 years.

Queen Mary’s HULT Prize winners for 2018 are ET Collect.  Four 2nd year Business Management students: Yomma Elsayed (Egypt), Habiba Abdelrahman (Egypt) Xinxi Cao (China) and Sihui Zhang (China).  whose winning idea is to partner with businesses and cities in Egypt to create products from recycled rubbish.  Their forecast of creating 30,000 jobs has got the attention of the Egyptian Ambassador for they will meet them this month. This winning team will compete in the Oslo, Norway regionals where there is a high awareness of environmental issues. 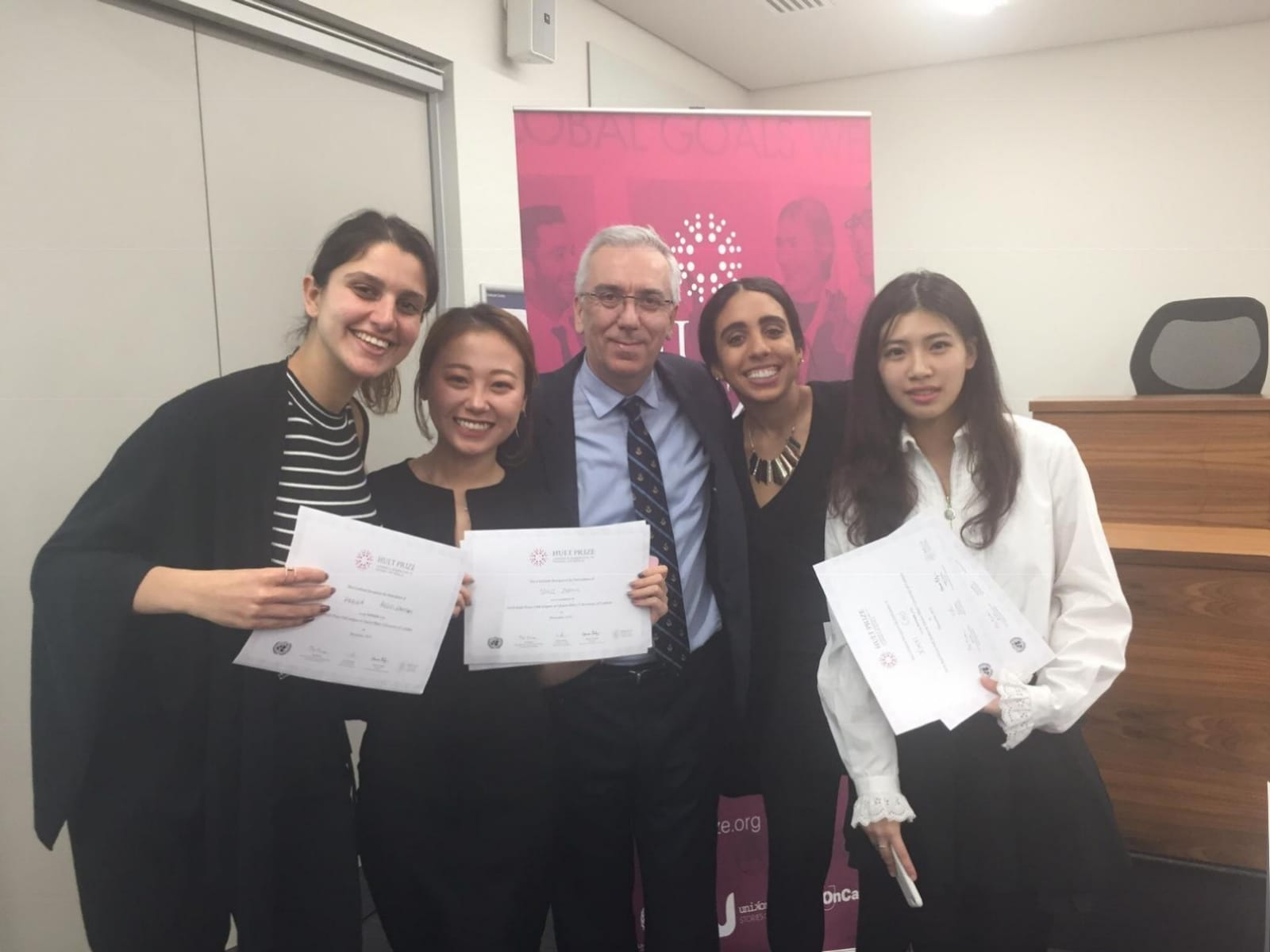 It is ET Collect's honor to represent Queen Mary University and compete in the regionals. Hult Prize is a life-changing opportunity that will enable us to impact the world positively.  Yomna Elsayed.

The runner up team “Consciously aware” is comprised of the following students; Léon Piclet (French, 2nd year student in Business Management), Matteo Colledan (Italian, 2nd year students in Business Management) and Enrique Martínez Serrano (Spanish, 2nd year Aerospace engineering student). Their innovative idea to change the life of up to 15 million waste pickers globally while tackling waste collection from poor households and creating grounds for entrepreneurship developments among the youth has resulted in the HULT Prize awarding them a much sought after wildcard ticket. Thus, giving them the opportunity to compete at the South America Regionals in Rio de Janeiro.

The need for innovation in the waste management sector combined with the 2019 HULT Prize goal to create meaningful jobs for the youth, has inspired us to make an impact through smart processes and technologies. We feel honored to represent Queen Mary University in the upcoming Finals in Rio De Janeiro. Léon Piclet.

Queen Mary entered the Hult Prize competition for the first time last year with two teams that competed at the London and San Francisco regionals.  The quality of the teams and their ideas from the In-Campus competition has enabled Queen Mary to successfully do this again.  As Dr Evangelos Markopoulos, the Hult Prize Mentor says:

Representing our institution with more than 1 team on the next round is something less than 1% of the universities have the privilege to do.

We wish ‘ET Collect’ and ‘Consciously Aware’ the best of luck in their regional finals in March. We look to watching how this competition unfolds.