Dr Yasmin Ibrahim is a Reader in Communications in the School of Business and Management. She has a wide range of multi-disciplinary research interests and has published extensively in the field of new media technologies and digital culture. Her other research interests include media literacy, visual culture and risks that have emerged in the digital environment with the increasing appropriation of digital technologies in our daily lives. 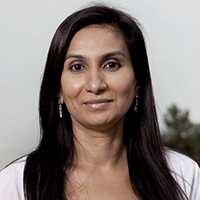 You are a Reader in Communications in the School of Business and Management, can you tell us a little more about your role?

I started at Queen Mary in 2009. I began my academic career at the University of Brighton while completing my doctoral thesis at the London School of Economics. Prior to that, I had left a successful career in Publishing in South-East Asia leaving my position as Vice-President and Managing Editor for a portfolio of titles to pursue an academic career. It was a very humbling experience starting again as a student.

I teach on new media technologies and consumer cultures of branding. In addition to my main research, I have also written about the construction of Islam in postmodernity and the need to build theories from postcolonial perspectives in the field of media and communications. I’m also the Equalities Rep for UCU which entails both policy deliberations and undertaking casework.

You recently wrote a book about the migrant camp at Calais known as ‘The Jungle’. What inspired your interest in that area?

The topic is a profoundly personal one for me. Both my parents lost their childhoods – one to poverty and the other to a typhoid epidemic. My mother lost her elder brother and sister aged eight and 12 to the same illness and when she became ill, her parents did everything in their power to make sure she survived. As a result she lost out on schooling and her early childhood memories were of ill health, countless injections and being fed quite a lot of awful things to nurse her back to health. My father left home in India to seek work in the British Colony of Malaya, as it was known then. He had no idea what he was going to do but his mother’s tears rolling down his cheeks one evening as she held his head in her lap made him determined to find a living in faraway Malaya. Having two parents who lost their childhood, I was drawn to Calais due to the children, particularly the unaccompanied ones. Their extreme trauma made us write the book to highlight the trauma of forced migration and being stateless.

What projects are you currently working on?

One strand of my research focusses on new media technologies, and another on the notions of ‘othering’ encompassing research into migration, memory, Islam, race and identity. You could say I’m interested both in the human and the post-human. I’m working on two books at the moment; one on why we image our environments non-stop and the implications of this on our privacy and society, to be published with Routledge. The second book is on ‘Facebook capitalism’ and this book looks at the ways in which social media platforms engross us through new modes of sociality while converting us into data through a hidden logic, drawing us into a post-human existence of serving the ‘ghosts in the machines’. I argue that these platforms used for exchanges and transactions will make us fatigued while we become embroiled into new modes of affective and invisible labour. My next book is the Production of the self in the digital age, which is due later in 2018.

Queen Mary is hosting the fifth UN PRME conference, tell us about it.

Business and management schools play a key role in shaping the mindsets and skills of future leaders and can be powerful drivers of corporate sustainability. The School of Business and Management is a signatory of Principles of Responsible Management Education which is a United Nations-supported initiative drawing on six principles(objectives, values, curriculum, research, partnership and dialogue) to raise the profile of sustainability in higher education. This means we are committed to developing future leaders with the skills needed to balance economic and sustainability goals while at the same time, drawing attention to Sustainable Development Goals (SDGs) and aligning academic institutions with the work of the UN Global Compact.

I’m the PRME coordinator at the School of Business and Management and this year the School is hosting the fifth UN PRME UK and Ireland Conference under the theme of ‘Leaving no one behind' - inclusive responsible management education in an era of precarity’. It is in sync with the School’s ethos of inclusive responsible management being part of an east London university serving a diverse and international cohort of students. The conference will take place from Monday 25 to Wednesday 27 June and we have an interesting line up of speakers including a student and a business panel on the theme.

What do you like to do when you’re not working?

I like to collect antiques and near-antiques and have done so from early on in my career. From my first pay cheque I bought an old clock from a shophouse in Singapore.  The owners were happy to sell the clock to me for 75 Singapore dollars and it felt like an expensive purchase then.  Today my house is full of old clocks and my children complain all the time that despite so many clocks none of them work.   If I had them all keyed and working, they would be chiming at different times and I don’t think anyone would get any sleep!

When I am not collecting things at an auction or antique shops, you’ll find me in the garden.  When we moved to east London, our house was burgled and it had been broken into through the back window.  We moved into an old house and did not have time to work on the backyard which had been a swimming pool filled with concrete.  After the burglary I didn’t want to stare into a space which reminded me of the loss and I was determined to transform it into something that brought joy and hope.  Today it does just that for me when I stare out of the window.  I also serve as a magistrate in east London, and the School has facilitated my continued service by ensuring my rota is worked around my teaching timetable, which I’m grateful for.

The fifth Annual Conference of PRME Chapter UK & Ireland will take place from Monday 25 to Wednesday 27 June at the School of Business and Management.

You can also learn more about Dr Yasmin Ibrahim and her research on her webpage.