World Aids Day – Improving the lives of everyone affected by HIV

As we mark 40 years since the first reported cases of HIV-related illnesses and deaths, we can see that HIV treatment and care has come a long way since the times when being diagnosed with HIV was a death sentence. 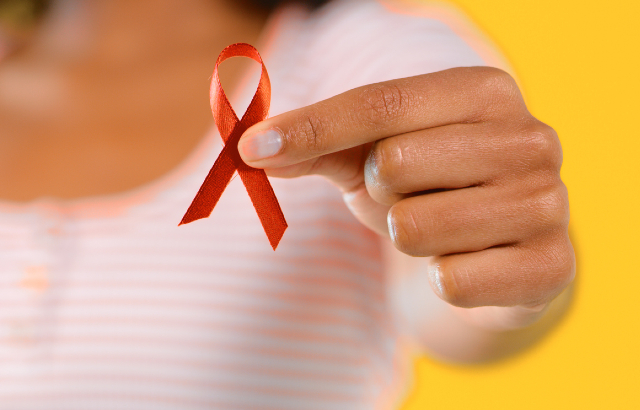 Woman holding up a red ribbon, the universal symbol of awareness and support for people living with HIV. Credit: katleho Seisa/iStock.com

Now, 98 per cent of people living with HIV in the UK are on effective treatment and 97 per cent can’t pass the virus on.

Researchers and clinicians at Queen Mary University of London and Barts Health NHS Trust are at the forefront of leadership and research to develop innovative treatments, reduce health inequalities and fight stigma to support better health for all those living with HIV.

As former chairs of the British HIV Association (BHIVA) Queen Mary’s Professor Chloe Orkin and Honorary Professor Jane Anderson have been integral in transforming the lives of people living with and affected by HIV.

Despite the vast progress in terms of HIV care and treatments, continued efforts are still needed to fight HIV stigma. For example, recent research from the National AIDS Trust suggests that only 16 per cent of people know that if someone is on effective treatment, they can’t pass HIV on and can expect to live a long and healthy life.

In 2019, Chloe Orkin, Professor of HIV medicine at Queen Mary and Consultant Physician at Barts Health NHS Trust featured in the BBC documentary "HIV and Me," with former Wales rugby captain Gareth Thomas. As part of the programme, she helped him to tackle some of the stigmas, myths and misunderstandings surrounding the condition.

Consistent use of antiretroviral therapy (ART) by people living with HIV to maintain an undetectable viral load is a highly effective strategy to prevent the sexual transmission of HIV.

During her time as BHIVA chair, Professor Orkin played a significant role in the association’s support for the Undetectable=Untransmittable (U=U) statement, which unambiguously states that a person on fully suppressive HIV treatment cannot transmit HIV. Under Professor Orkin’s leadership, BHIVA were early champions of the statement and supporting campaign, providing guidance and resources for health care professionals to ensure the U=U message is consistently integrated into clinical care.

Professor Jane Anderson now co-chairs London’s Fast Track Cities group who are working to get London to Zero by 2030: zero new HIV infections, zero preventable deaths, zero HIV associated stigma and best quality of life for people living with HIV before 2030. In October, London’s considerable progress towards this goal was internationally recognised at the Fast-Track Cities international conference where the capital received a HIV excellence award.

Professor Anderson has also recently worked as part of a group of global experts to develop an international consensus on the role of health systems in securing the wellbeing of people living with HIV for the long term.

Ethnic inequalities are commonly seen in many different areas of health, and they have also been reported in HIV Care within Europe and the US. In a study published earlier this year, a research team led by Dr Rageshri Dhairyawan, a Consultant in Sexual Health and HIV Medicine at Barts Health NHS Trust and an Honorary Senior Lecturer at Queen Mary, explored if similar inequalities existed in HIV treatment and care amongst heterosexual men and women living with HIV in the UK.

As these factors are associated with HIV related ill-health and mortality, these results are of concern. Work needs to be done to understand these inequalities and address them.

The impacts of living with HIV for older women

Due to advances in HIV treatment and care, people with HIV are living longer. Increasing numbers of women living in the UK are reaching older age, and in 2018, almost 15,000 women attending HIV care were aged 45 years or over. Despite this, little is known about the social and mental health impacts of living with HIV for older women, especially those belonging to ethnic minority groups.

In a recent UK study, researchers explored the links between socioeconomic factors, mental health and ethnicity in women between 45-60 years old living with HIV in England. The findings show that older women with HIV experienced high levels of poverty, psychological distress and social isolation, and that these socioeconomic and psychological impacts were especially prevalent among Black African women of this age. Despite being more likely to experience psychological distress, Black African women were less likely to have been diagnosed with depression likely due to possible inequity in access to mental health services.

Holistic HIV care requires awareness of the psychosocial needs of older women living with HIV, which may be more pronounced in racially minoritised communities, and we recommend prompt referral for support including psychology, peer support and advice about benefits.

This November, the National Institute for Health and Care Excellence (NICE) approved the first long-acting injectable treatment for HIV-1 infection.

This is a paradigm-shifting moment in the UK where, for the first time, it is possible to release people with HIV from the burden of daily oral therapy and offer them instead just six treatments per year.

The First Long-Acting Injectable Regimen (FLAIR) study, published in the NEJM and led by Professor Orkin, first showed that a monthly injection of the HIV drug combination (containing the drugs cabotegravir and rilpivirine) is as effective as the standard daily oral treatment for suppressing the HIV virus.

Until recently, approval of this treatment required an initial four-week period of oral therapy before the first injections, which is less convenient for patients and more complicated to implement in clinical practice. In October, Professor Orkin and colleagues published new results from the study showing that the safety and effectiveness of this injectable HIV drug treatment was similar with or without the initial lead-in period of oral therapy. As a result, the European regulatory agency (EMEA) has now updated its prescribing guidance for health care professionals to give people living with HIV the option to start with injections without an initial period of oral therapy.

In 2019, news of a second patient free of HIV following stem-cell therapy reignited the possibility of an HIV cure. The London-based patient had received a stem cell transplant that replaced their white blood cells with HIV-resistant versions and following this was able to stop taking ART.

Dr John Thornhill, Consultant Physician at Barts Health NHS Trust, was part of the team led by Professor Ravi Gupta tasked with looking for signs of the virus in the patient 30 months after stopping treatment. Together, they were able to confirm that there was no evidence that the virus had returned, hinting that the first case of this successful stem cell transplant decades earlier may not have just been a one-off.

In another study, Professor Sarah Fidler, Dr Thornhill and other colleagues tested an alternative HIV cure strategy, ‘kick and kill’, which aims to deplete groups of HIV-infected cells, known as the HIV reservoir, that cannot be killed with current treatments and act as a barrier to a HIV cure. The researchers tested whether using drugs called histone deacetylase inhibitors alongside a therapeutic HIV vaccine, could make these cells easier to kill. Whilst the findings show that this approach was not any more effective at depleting the HIV reservoir than current ART therapy, the researchers suggest this type of approach could still hold promise and that further trials are required.

Improving health for all

Listening to the local community

The Covid-19 pandemic laid bare some of the longstanding health inequalities that exist within our local East London community. Dr Vanessa Apea, a Consultant Physician in Sexual Health and HIV Medicine at Queen Mary has established a new research project, Amplifying Lives, to understand the lived experiences and needs of Black, Asian and Minority Ethnic Communities in East London.

As part of this project, Dr Apea will explore the journey to late diagnosis of HIV in women of Black African heritage. It is hoped this work will support the development of targeted interventions and pathways aimed at earlier diagnosis and improved outcomes in this group.

The Sexual Health and HIV All East Research (SHARE) Collaborative, a new HIV research centre, was established earlier this year to address health inequalities and improve quality of life for everyone affected by HIV. The centre, funded by Barts Charity, brings together expertise from Queen Mary University of London and Barts Health NHS Trust and aims to find ways to prevent future HIV infections and trial innovative new treatments.

The dedicated centre is based in East London, where many minoritised communities have been disproportionately affected by HIV and poor sexual health, with some of the highest rates of HIV infection in England.

The SHARE team is working in partnership with local people to develop collective knowledge about HIV and sexual health. They hope this approach will provide rich understanding of the health needs of local people and help find ways towards health equity whilst ensuring no one is left behind.