Wingate professor featured in BBC film about living with IBD

Professor Qasim Aziz, Director of the Wingate Institute of Neurogastroenterology at the Blizard Institute, features in a new short film produced by the BBC and released online on Saturday 12 September. He discusses the connection between the brain and the gut, and potential new treatments for inflammatory bowel disease. 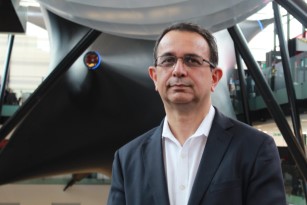 The term inflammatory bowel disease (IBD) is used to describe a group of conditions which are characterised by inflammation of the digestive system, which often causes chronic pain in sufferers and a reduction in quality of life as a result. The most common conditions are ulcerative colitis and Crohn's disease.

The film, titled ‘Living with IBD: Ulcerative colitis and Crohn's disease’ follows BBC reporter Bryony Hopkins, who has lived with Crohn’s Disease for most of her life. During the film she meets others living with IBD and takes part in research being conducted by Professor Qasim’s team at the Wingate Institute.

Professor Aziz and his team are currently exploring the connection between the brain and the gut, and how this vital connection could lead to ground-breaking new treatments for conditions such as IBD.

During the video we see presenter Bryony take part in an experiment, conducted by Visiting Clinical Research Fellow Dr Kazuya Takahashi, to determine how stress causes inflammation and pain in IBD, and whether stimulation of the vagus nerve can help.

To measure this, she takes part in a stress test, which examines how the body responds to intense stress. She is asked to complete an IQ test while listening to rock music in one ear and classical music in the other. It is expected that the immune system will activate in response to the stress she is experiencing, and inflammatory proteins found in the blood will increase. The researchers also test whether stimulating the vagus nerve at the same time can reduce this inflammatory response in the blood.

In a similar study, researchers from the Wingate Institute previously demonstrated that transcutaneous vagal nerve stimulation prevents the development of and/or reverses established visceral hypersensitivity in acid‐induced oesophageal pain.

Professor Aziz, said: "The results from the previous study are exciting because they demonstrate that non-invasive methods like application of an electrical stimulus to the vagus nerve via the skin can not only prevent development of pain after an injury but can reverse established pain. This method therefore has the potential to prevent and treat pain arising from the gut and therefore further research is now required to assess its effectiveness in disease states."

It is hoped that vagus nerve stimulation can evolve as a potential non-invasive, non-drug-related treatment for mild to moderate Crohn’s and ulcerative colitis, and could be used to prevent patients developing moderate to severe IBD.