UK health ministers shared the news of an upcoming funding boost to brain tumour research, during a visit to laboratories at Queen Mary University of London this week. 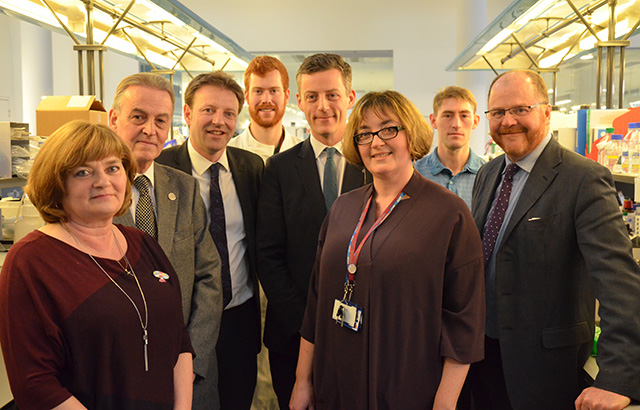 Professor Silvia Marino, Director of the Brain Tumour Research Centre of Excellence at Queen Mary, presented an overview of her group’s research and their focus on glioblastoma multiforme (GBM), the most common and most aggressive adult malignant brain tumour.

The politicians and Professor Marino discussed the challenges and opportunities facing the UK and global research community, which was followed by a tour of the laboratory, where Dr Gabriel Rosser and James Boot from Professor Marino’s team gave an overview of their individual research projects.

Yesterday, the Department of Health and Social Care announced that £45 million in funding would be made available for brain tumour researchers by the National Institute for Health Research and Cancer Research UK.

Professor Silvia Marino from the Blizard Institute said: “This funding will play a key role in accelerating the translation of basic discoveries in brain tumour biology for patient benefit, particularly as it emphasises the global and collaborative approach the research community must take to succeed.

“Glioblastoma is a relatively rare form of cancer, meaning that global collaboration is essential. Of course, there will be challenges, but the announcement is a step in the right direction and we now need policymakers and health care professionals, the world over, to work together to accelerate the discovery of powerful new treatments.”

The Secretary of State for Health and Social Care Jeremy Hunt and Baroness Tessa Jowell also chaired a roundtable with cancer charities, leading academics, including Professor Marino, and pharmaceutical companies, to discuss how to improve brain cancer diagnosis and treatment.

The Roundtable was convened following Baroness Tessa Jowell’s speech to the House of Lords last month, when she shared how she had been diagnosed with a highly aggressive form of GBM – which typically has a prognosis of just 9-18 months.

Health and Social Care Secretary Jeremy Hunt said: “While survival rates for most cancers are at record levels, the prognosis for people with brain tumours has scarcely improved in over a generation. I am grateful to Baroness Jowell and other MPs who have campaigned with great dignity and courage to raise awareness of this issue.

“Our ambition is to deliver a big uplift in the funding of brain cancer research, while galvanising the clinical and scientific communities to explore new avenues for diagnosis and treatment in the future – it is a chance to create a genuine, step change in survival rates for one of the deadliest forms of cancer.”