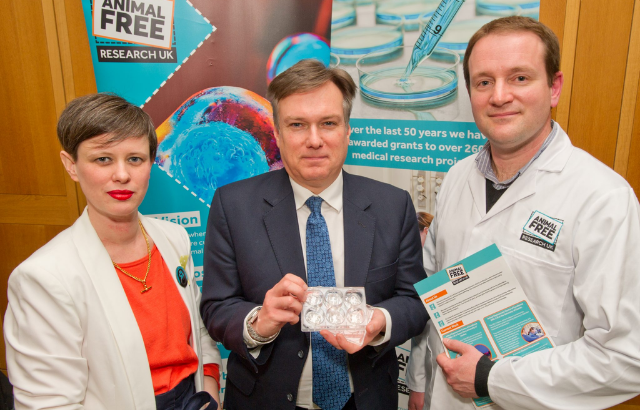 Animal Free Research UK is a medical research charity, campaigning to end the use of animals in medicine. Drug development is notorious for its inefficient and costly process, partly due to traditional reliance on animal testing that sees many ineffective or toxic drugs advance to clinical trials. Animal Free Research UK believe that by using human models, we can develop more effective methodologies where human diseases are cured faster and without animal suffering.

Based in the Blizard’s Centre for Cell Biology and Cutaneous Research, Animal Free Research UK-funded scientist Dr Adrian Biddle is leading research in New Approach Methodologies, free from animal testing. Among a number of research interests, the Biddle Lab is concerned with the question – how can diverse cancer stem cell phenotypes best be modelled in vitro, in order to accurately predict cellular behaviour and response to therapy? Through the use of organ on a chip devices, early career researcher Alice Scemama showcased to MPs how researchers can effectively model head and neck cancer metastasis and improve new drug discovery processes for the disease.

Dr Adrian Biddle comments, ‘It was great to go to Parliament and show off Alice's head and neck cancer metastasis-on-a-chip model to so many MPs. The level of interest in our in vitro human cancer models was very encouraging, as was the recognition of the Blizard Institute as a world-leading centre for in vitro engineered human disease models.’

The presentation demonstrated to MPs how human-focussed medical research can benefit both humans and animals. Henry Smith MP, said: “As I and my Parliamentary colleagues learnt to today, there are better ways – to model human biology and diseases, and these give the accurate data needed to accelerate the development of new drugs and personalised medicine.”

He added: “Dr Biddle and his colleague also demonstrated how the UK is well placed to become a global science superpower and with the right investment and government support, can lead the work in this vital, innovative and ethical work.”

Biddle and Scemama’s showcase in Parliament and the overwhelmingly positive response from MPs, indicates promising steps in the UK’s transition to human relevant science.