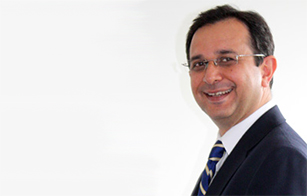 ESNM is a non-profit society with the mission to defend the interests of all professionals in Europe involved in the study of neurobiology of gastrointestinal function. It is an entirely voluntary organisation whose mission is to expand knowledge and interest in the field of neurogastroenterology and motility, encourage basic and clinical research in the field, and establish the standards for good clinical practice and patient care.

Following the announcement of his election in March, Professor Aziz said: "It is an honour to be recognised by your peers and I appreciate this opportunity to serve the European Society of Neurogastroenterology and Motility – a society that I have been a member of since I was a clinical research fellow."

Professor Aziz’s research is aimed at understanding the neurophysiological basis of human brain-gut communication. He has pioneered the use of a number of neurophysiological techniques to study the human brain gut axis, making important contributions to the understanding of how gut pain is processed in the brain, and how both inflammation and injury to gut nerves and psychological factors can lead to the development of chronic visceral pain. Amongst his major achievements is the systematic evaluation of the human brain processing of visceral pain and nutrient responses and how these are modulated by psychological factors.

His current pain programme includes studies of the psychophysiological risk factors for the development of chronic visceral pain and use of autonomic nervous system neuromodulation for the mangagement of visceral pain and inflammation. He has also performed seminal research on the link between hereditary disorders of connective tissue such as Ehlers-Danlos Syndrome and gastrointestinal symptoms. Currently he is also studying the effect of psychological factors that modulate appetite and the neuroendocrine and gut physiological responses to nutrients. He has previously been a Medical Research Council (MRC) Clinician Scientist and has held the MRC Career Development Award until 2008.

Professor Aziz is also Co-lead for the Neurogastroenterology module of the MSc Gastroenterology programme, and is a Lecturer on the MSc Neuroscience and Translational Medicine programme, both provided by the Blizard Institute at Barts and The London School of Medicine and Dentistry.

Professor Aziz has obtained national and international awards for his research, the two most important being the British Society of Gastroenterology Research Gold Medal and the American Gastroenterology Association Janssen Award for Basic and Clinical Research. He has published numerous original articles in reputed medical journals such as Nature Medicine, Nature Neuroscience, Lancet and Gastroenterology.