PhD student Harriet Allan from the Blizard Institute's Centre for Immunobiology attended Parliament to present her research to politicians and scientific experts as part of the STEM for BRITAIN event. 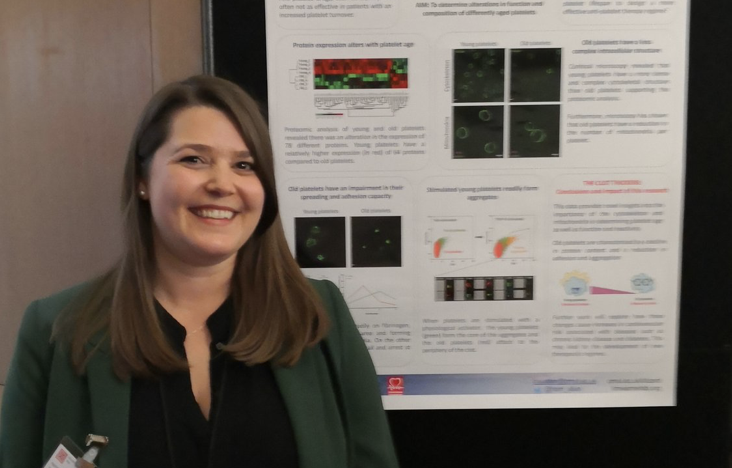 The event, which took place on Monday 9 March, saw Harriet's work judged against dozens of other young scientists’ research in the only national competition of its kind.

Harriet's research focuses on investigating how platelets change in function and composition as they age within the circulation.

Commenting on her experience, Harriet said: "Attending STEM for Britain 2020 was a great opportunity to present my work to a diverse audience and engage in conversation more broadly about promoting the work of early career researchers. I would encourage other researchers to apply for STEM for Britain next year as it was a really well organised event and gives you experience in presenting your work outside a conventional conference environment."

Improving our understanding of the aging process of platelets

The research presented in Parliament was part of her PhD project where she used proteomic analysis and immunofluorescence to investigate changes in the structural composition of young and old platelets in healthy individuals.

There are numerous reports suggesting that newly formed platelets are hyper-reactive and are associated with an increased risk of thrombosis, however research on the natural ageing process of platelets is lacking. In this work, Harriet has shown that during a platelet’s lifespan, which is approximately 10 days, there is a decline in protein levels, with a particular loss of cytoskeletal and mitochondrial proteins. The reduction in these proteins was accompanied by a reduction in their ability to adhere and aggregate. This is the first systematic study looking at how changes in the composition of platelets may contribute to the alterations in their function.

Harriet said: "I hope that my research will form the basis of further investigations into understanding why platelet lifespan may be altered in diseases such as chronic kidney disease and diabetes mellitus."

About STEM for Britain

STEM for BRITAIN is a poster competition, which takes place in the House of Commons, involving approximately 180 early stage or early career researchers.

Stephen Metcalfe MP, Chairman of the Parliamentary and Scientific Committee, said: “This annual competition is an important date in the parliamentary calendar because it gives MPs an opportunity to speak to a wide range of the country’s best young researchers.

"These early career engineers, mathematicians and scientists are the architects of our future and STEM for BRITAIN is politicians’ best opportunity to meet them and understand their work."

The Parliamentary and Scientific Committee runs the event in collaboration with the Institute of Physics, Royal Society of Chemistry, Royal Academy of Engineering, Royal Society of Biology, Physiological Society, Council for the Mathematical Sciences, and the Nutrition Society.