Peston Lecture 2021: The Wellbeing of the Man or Woman on the Mile End Omnibus

An Evening with General Practitioners... with Barts and The London GP Society

Alumni Talk: 'Joseph Merrick, Frederick Treves and the Story of the Elephant Man' 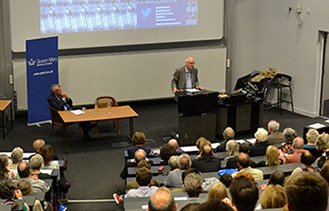 More than 90 alumni and guests attended our reunion event on the Mile End campus on Friday 2nd October 2015. The event was jointly organized by the School of History, the Alumni Office and a small group of History alumni from the 1960s - including Jeremy Coke-Smyth (1966) whose grandfather was Francis Clarke who founded the Department of History at Queen Mary in 1911.

During the afternoon alumni enjoyed lunch, networking, campus tours led by current Student Ambassadors from the School of History, as well as tea and cakes and meeting with academics in the ArtsTwo Building after a short visit to the Archives exhibit in the main Library.

We had graduates from between 1953 and 2013 attending who enjoyed socialising with old friends and catching up with each other’s news. Many commented on how much the campus has changed and how much the School has developed since they left.

It was a wonderful day, a chance to catch up with old friends and meet new ones. I was delighted to talk to the current students and learn about how proud they are of the School of History. It was wonderful to see how far the School has progressed since I graduated in 1969. I, too, am proud to have been a part of it.
Philip Rescorla OBE (1969)

As part of the day's programme, Professor Peter Hennessy (Baron Hennessy of Nympsfield, Attlee Professor of Contemporary British History and Patron and Senior Advisor of the Mile End Institute) delivered a keynote lecture on 'Writing the history of one's own times'. The lecture, which was introduced by Professor Philip Ogden (Senior Advisor to the Principal), was open to all alumni and friends of Queen Mary, as well as current staff and students and the general public. The ArtsTwo Lecture Theatre was almost at its full capacity with over 250 attendees, including groups of sixth form students and their teachers from as far afield as the Perse School in Cambridge and the Trinity School in Croydon. 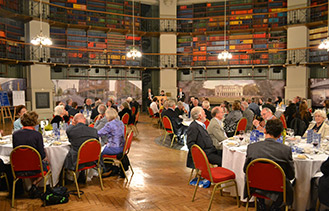 The lecture was followed by a drinks reception and a three-course meal in the Octagon, our elegant event space which most alumni remembered as the College Library. The dinner started with an appreciation of one of our longest serving academics, Professor Jim Bolton, who first arrived at Queen Mary almost exactly 50 years ago, on the 1st October 1965, as a young lecturer. Professor Bolton was very pleased to see many of his former students again and reminisce with them about their times at Queen Mary.

My sincere congratulations on organising such a splendid History Alumni Day. Our former students were so impressed by the developments in both the College and the School of History and at the warmth shown to them in the afternoon and the evening. It was good for me to catch up on many of my own past students and feel that my academic life has been a success because, apparently, I advised one young woman to follow her heart nearly 50 years ago and she is still married to the same man!
Professor Jim Bolton

Photographs were taken throughout the day by third year History student Aidan Higgins and are available to view on our Flickr page.

You can view the video recording of the lecture by Professor Peter Hennessy by clicking here. The lecture is also available as audio file.

School of Business and Management Alumni Dinner in Islamabad

Alumni Afternoon Tea at the Festival of Communities