Westfield College was founded in 1882, with the first students arriving at Marefield Terrace in Hampstead on 2 October. It was the first college to open with the specific aim of preparing women for the degrees of the University of London.

Over the years Westfield grew into a multi-faculty college of the University of London, catering for the needs of both male and female students and developing strong academic links with other colleges within the University. During the mid-1980s some of the staff from the Mathematics and Physics Departments and the whole of Biological Sciences and Chemistry moved to Queen Mary College. In 1987, agreement was reached for a merger of Westfield’s strong Faculty of Arts with Queen Mary’s science, engineering and laws base. The two colleges worked together to achieve a legal merger in 1989.

By 1992, King’s College London had taken over a large part of the Westfield site for student residences, including the Old House and the residences around the Maynard Quadrangle and Kidderpore Hall. The remaining area was sold for development into luxury housing.

The Westfield Trust (1989-2010) was formed following the sale of the Westfield site. During its 21 years of existence, the Trust provided some £4 million of support towards a number of initiatives at Queen Mary including extensions to the Library and the Students’ Union; the restoration of both the original 1887 foyer in the Queens’ Building and the Grade II-listed Octagon. The Trust has provided long-term support for the establishment and maintenance of the purpose-built Westfield Nursery on Bancroft Road and the pastoral work of the St Benet’s Chaplaincy. The Westfield Trust leaves an ongoing legacy to provide undergraduate prizes and support for postgraduate students.

In 2004, the Westfield Village Student, which was built along Westfield Way on the Mile End campus, was opened by HRH The Princess Royal, Chancellor of the University of London. The Village emulates the residential nature of the Westfield site in Kidderpore Avenue and the Westfield legacy lives on in many of the names given to the new student residences including Maynard, Selincourt, Lodge, Stocks, Chesney, Chapman and Varey.

A history of Westfield College, Castle Adamant in Hampstead: A history of Westfield College, 1882-1982, written by the late Janet Sondheimer, formerly Honorary College Archivist at Westfield, can be ordered from the Alumni Relations Office at Queen Mary. Available for £5 (excluding p&p), this fully illustrated book presents a rare glimpse into the first century of Westfield’s life and commemorates the special features which subsequently contributed so much to the merger with Queen Mary College. 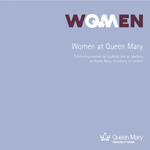 A more recent overview of the contribution of women to the history of both Queen Mary and Westfield colleges was published in 2007 to coincide with the Women at Queen Mary exhibition which was held in the Octagon that same year. The book costs £7.95 (excluding p&p). Download an order form:

You can also view profiles of notable women from Westfield College by visiting the Women at Queen Mary website. Click here to begin your tour. 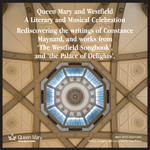 A newly produced CD, Queen Mary and Westfield: A Literary and Musical celebration, is devoted to the artistic visions and expressions of two key figures in the history of both colleges: Robert Tong, Registrar and Secretary of Queen Mary College from the immediate post-war years to the mid-1970s, and Constance Maynard, First Mistress of Westfield College from 1882 until 1913.

The CD includes a portrayal of College life during these two periods, notably the Westfield Song Book and the musical, The Palace of Delights, and is available for £15 (excluding p&p). Download an order form: